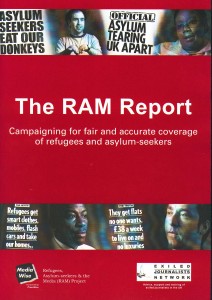 The RAM Report: campaigning for fair and accurate coverage of refugees and asylum seekers explains every aspect of the ground-breaking work conducted by the RAM Project since 1999. It is designed to assist minority groups develop strategies that will improve media coverage of their issues. It was launched at NUJ Headquarters on Monday 6 June 2005.

To order a copy, please contact us at info@mediawise.org.uk, providing your postal address and the number of copies you want.

Foreward to the report by Brian Jones (former Deputy Editor of The Guardian, former MediaWise trustee and a member of the RAM Project Advisory Panel)

Election time, and a party canvasser approached me in the street, his two small children in tow. “Anything that worries you in particular? We might have the answer,” he said. “Yes,” I replied, “Asylum-seekers and refugees.” His face lit up. “Ah yes, but don’t despair – we’ve made it very clear we’ll crack down on them,” he said. “That’s what worries me,” I answered. “Your ideas are even worse than what’s happening already.”

For a moment his surprise left him speechless.

That chance encounter seemed to sum up the opportunism of some politicians when it comes to asylum and its implications. The climate of hostility surrounding the subject is worsened by nastier elements in the tabloid press which have sought to nourish the prejudices already fed by popular misconceptions and some bizarre reporting.

Stories such as the Swan Bake (The Sun, 4 July 2003) that never was, or the equally-spurious nocturnal donkey-feast, might in other circumstances be dismissed as grotesque jokes. But the page-one treatment given them by The Sun and the Daily Star respectively ensured that they took on the role at least for a time of urban myths – to be repeated in queues and pubs, or to the next reporter with a notebook or microphone who turns up in search of an opinion on asylum-seekers.

Such insidious nonsense is not new. Similar prejudices against would-be immigrants were nourished in the 1930s by the briefly fascism-flirting Daily Mail and its associates under the first Lord Rothermere. But many journalists who escaped from Hitler or Stalinist lands later greatly benefited the British press. Indeed, one of the ironies of the early 21st century is that as some tabloids denigrate refugees, scarcely a week goes by without the upmarket papers carrying an obituary of yet another distinguished contributor to our national life who was once a refugee or child of refugees.

But the dafter kind of daily press diet appears in tandem with a steady accompaniment of scare stories not so much about asylum-seekers or refugees but about foreign scroungers (such as the Daily Express ‘Britain here we come’ front page from 20 Jan 2004). The reality in Home Office figures (reported in The Guardian, 9 March 2003) is that only 21 of the 133,000 east European workers registered here had signed on for benefits.

To counter such nonsense has been one of the aims of the Refugees, Asylum-seekers and the Media (RAM) Project launched in 1999 by PressWise (now MediaWise). Through workshops and bulletins, networking and dialogue with community organisations and refugee support groups, the Project has sought to encourage a fairer picture in the local and national media. RAM’s Directory of Exiled Journalists, updated online, is one obvious link for those journalists and the British press.

Another minor but nonetheless important victory has been the adoption by the Press Complaints Commission of guidelines seeking, with some success, to eradicate such misnomers as ‘illegal’ asylum-seekers.

The RAM Project will soon be handed on to other, dedicated campaigners who know much more has to be done. But MediaWise, among its several other tasks, has pioneered an honourable role in persuading us all to think a little harder about the media’s reporting on immigrant strangers in need.